INFORMATION FOR THOSE SEEKING TO CYCLE SPAIN
U bent hier:Home»Regions»Valencia and Murcia (east coast)»When to Cycle Valencia en Murcia?

Research has proven that the regions of Valencia and Murcia have the healthiest climate in Europe. When considering the 300 days of sun, the low humidity, and the clean air that these regions enjoy, it is no wonder that this is so. Although summers are warm, the sea acts as a cooling buffer keeping the temperatures between 28 to 32 degrees. The winters are extremely mild and therefore attract many northerners attempting to escape frigid temperatures in other parts of Europe. Even in January, the coldest month of the year, temperatures easily reach the 15 and 16-degree mark. In the mountainous interior, the sun also shines, but the temperatures here are cooler in the winter and warmer in the summer. Although it does not rain often (around 44 days per year), when it does rain it rains hard for a few days and then the sun breaks through again.

When to Cycle in and around the Costas of Eastern Spain?

December, January, and February
The coastal regions are quite pleasant, with the highs reaching around or above 15 degrees in the coldest month (January). The same rule always applies in this area – the further you go inland or into the mountains, the colder it will get.

March and April
Besides a few days of heavy rain, these are wonderful months to cycle.

May and June
Along the coast, temperatures between 22 to 25 degrees and in the mountains around 20.

July and August
Temperatures reach above 30 degrees (also in the mountains) with little to no precipitation.

September and October
The worst of the heat is over at this point in the year and there are occasional showers. In October the temperatures along the coast average about 20 degrees with slightly cooler temperatures inland.

November
Average temperatures along the coast around 20 degrees and in the mountains between 10 to 14 degrees. 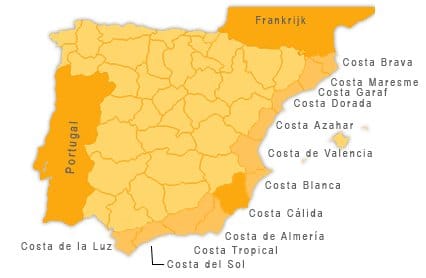