INFORMATION FOR THOSE SEEKING TO CYCLE SPAIN
U bent hier:Home»When to Cycle Each Region of Spain

Spain is a four-season cycling country. This means that throughout the year you can always find places with pleasant cycling conditions. The possibilities vary greatly from region to region. The temperature statistics of the major Spanish cities can be found below.

As these are the coldest winter months, most areas in Spain are to be avoided. Due to the mild daytime temperatures and hours of sunshine, however, the South and coastal regions do yield decent cycling conditions during this time. It must be kept in mind that this is a very personal decision as some people find 10 degrees to be decent cycling weather, while others will wait until it is 18 degrees. Regions that provide suitable cycling weather from December to February include:

End of February and March

Similar to March, but with a bit of luck you can also enjoy cycling the inland regions of Spain as well. The North remains prone to rain and wind.

Except for the high mountains, the rest of Spain provides pleasant cycling conditions during this time. Temperatures are enjoyable and nature is at its best. The mountains are still crisp and there is always the possibility of some rain showers.

All of Spain is accessible for cycling during this month. Around June 23 (St. John) temperatures increase dramatically and the true summer weather hits.

These are the hottest months in Spain. The inland regions of Spain are especially difficult to bear during this period, while the sea keeps coastal regions cooler and more manageable. Although most of the year the South and East are recommended cycling areas, during these months they are better to be avoided, while the Northern regions provide some respite from the heat and become attractive cycling locations, including:

Generally offers the best cycling weather of the year. Pleasantly warm with little wind. However, after the long, hot, summer, the natural beauty has dwindled a bit as many landscapes are arid and dry.

Although the weather is less predictable, October often still offers great cycling weather. In the inland areas, it is the transition month into winter. The evenings are generally colder and it gets dark sooner. It is possible that during this time you may have bad luck and run into one or two rainy days. In the Mediterranean areas, October looks more like a second spring and temperatures remain mild. The harvests are in and the agricultural areas are barren, while the cities have a great atmosphere.

There are still days in November that can reach up to 20 degrees, but temperatures around 14 degrees with rain are also possible. The first snow falls in the mountains during this month, meaning the best chance of a successful November holiday can be found in: 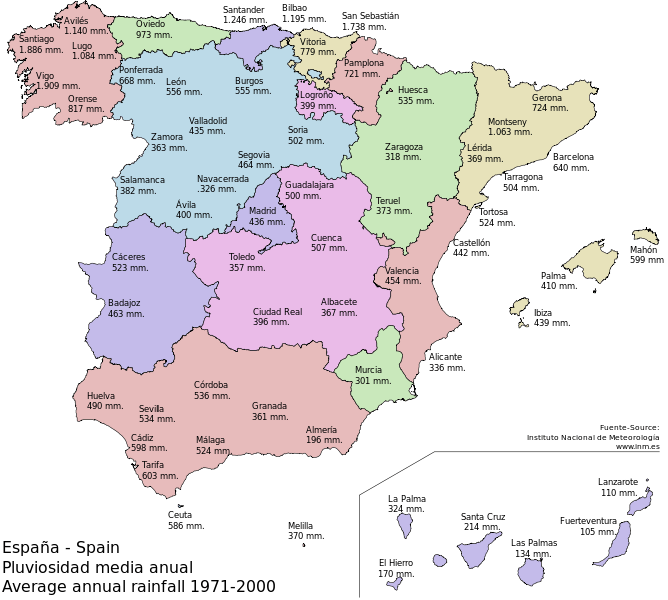 Most of the Rain Falls In…

Although you might not expect it, the greatest amount of precipitation falls in one particular place in Andalusia. There, in the southern province of Cadiz, lies the Sierra de Grazalema, a beautiful area known for its white villages. When storm formations from the Atlantic Ocean collide with the Sierra, they cause a lot of precipitation (2200 mm per year!), while the other side of the mountains hardly gets a drop of rain! The city of Almeria is located 250 kilometers to the east and at 200 mm per year, it is the driest place in Spain – meaning that the wettest and driest places in Spain are only separated by a few hundred kilometers!

Other places with high precipitation levels are without a doubt found in the northern regions of the country. The list of most rainfall after the Cadiz region is as follows: