INFORMATION FOR THOSE SEEKING TO CYCLE SPAIN
U bent hier:Home»Type of Cycling»Cycling the Via Verde del Aceite (Andalusia)

We consider the Via Verde del Aceite one of the top 10 most beautiful vias verdes in Spain. From the starting point in Jaen, you ride 128 relaxed kilometers through the heart of Andalusia, past beautiful villages and towns nestled in the endless olive groves.

General
Aceite means oil in Spanish. The railway track, now covered by the via verde, was used until 1895 for transporting oil. The route runs through the provinces of Jaen and Cordoba. We have found some vias verdes in Spain a bit boring, but this is absolutely not the case for VV del Aceite. Along the way, some of the things you will come across include old railway stations that have been converted into restaurants or shops, visitor centers, a stalactite cave with a huge bat population. The route used to called the Via Verde del Aceite y de la Subbética, but has since been shortened to Via Verde del Aceite. Most people do the route in about two days, but if you have the time and you want to veer off the path a few times, three days may be better.

The Route
The route is a mixture of pretty well-maintained asphalt and crushed clay and is well signposted in both directions. Although the gradient percentage for the route is quite low (max 2-3%) you will notice that you will be going up and down most of the time. From Jaen to Doña Mencía you climb from 400 to 600 meters and then descend again to 270 meters. If you leave the route to explore other areas this will usually involve a bit more climbing. Overall, the Via Verde del Aceite isn’t a super challenging route, but in the case of rain, the route intensifies due to the mud which can be difficult to cycle through.

The route is completely traffic-free and therefore very safe. The only danger lies in the iron posts, which are cut down to a height of 10cm from the ground, so keep an eye out at crossings. A few times on the route you do ride through a few long tunnels, all of which are well-lit.

How do you get there?
Nearly everyone starts this via verde in Jaen and ends in Puente Genil.

The closest airport is in Malaga. You can rent a car there and drive or take the bus or train to Jaen.

The bus takes at least four hours. If you bring your own bike in most cases they will allow you to put it in the luggage hold during the trip. The train is faster but you cannot take your bike aboard if choosing this option. Renting a car in Malaga and driving to Jaen is the easiest. Even more convenient: have a rental bike for your trip delivered to you in Jaen (see Facilities for Cyclists for more information). 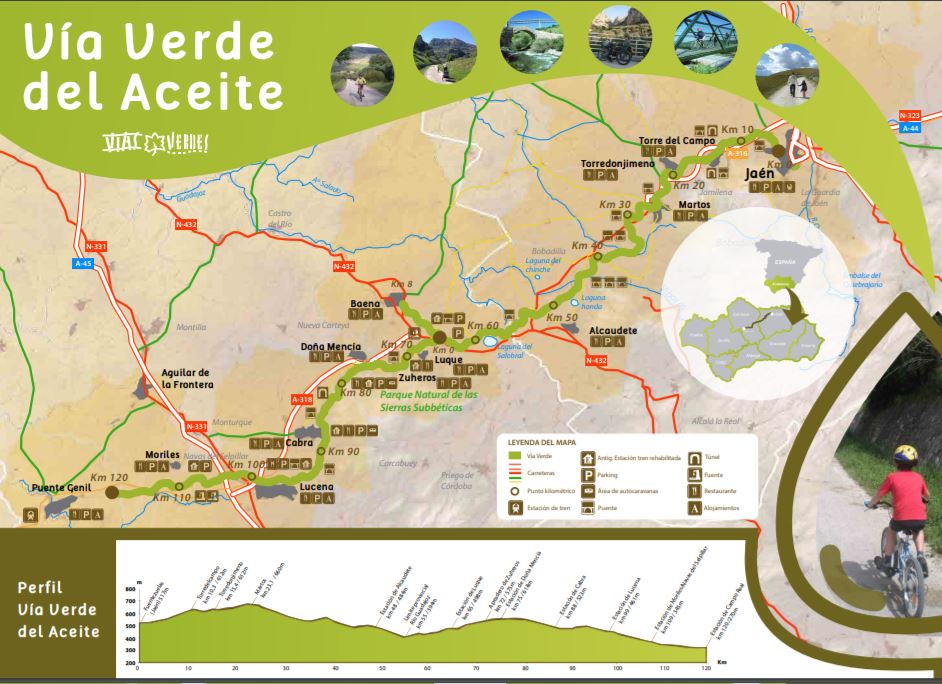 Facilities for Cyclists
Spain is a fantastic cycling country, but often you are faced with a question: how do I organize everything? This is not a problem you will face on the Via Verde del Aceite. There are several companies that can help you, including the Centro Cicloturista Subbetica located in Doña Mencía. They provide good rental bikes that you can have delivered to Jaen and picked up at the end-point in Puente Genil. If you want to return to your starting point they can also arrange transport for you. Meer information about the Centro Cicloturista can be found here. You can email the owner, Antonio, in English.

You can also book a fully fully-organized cycling tour of the Via Verde de Aceite through the Dutch travel agency Tejeda Travel.

Overnight Stays
You can find a nice hotel for 50 to 60 euros a night in the Spanish countryside. Most are on Booking.com. There are also campsites in the vicinity of the route. You can leave your camper behind in a number of places, such as in Doña Mencía.

When to go?
This part of Spain is scorching hot in the summer. Spring and fall are the most pleasant cycling seasons, but there are plenty of days in winter suitable for cycling as well.