INFORMATION FOR THOSE SEEKING TO CYCLE SPAIN
U bent hier:Home»Background Info on the Regions»Canary Islands»Cycling Tenerife

Cycling Tenerife: The Climbers Island
Tenerife, the largest of the Canary Islands, is one of the top vacation destinations in Europe. Although often busy with tourists, the majority of visitors to Tenerife stay within a 50-meter radius that encompasses their beach chair on the southern coast. Therefore, although the island is popular, the rest of the island outside of the main tourist attractions are quite accessible for cyclists.

The island is dominated by Mt. Teide, a dormant volcano that is Spain’s tallest peak at 3,718 meters. A rather small island housing the largest mountain in Spain can only mean one thing – lots and lots of climbing. Tenerife is not a destination for those trying to avoid elevation gains, but rather cyclists and mountain bikers seeking challenging, inspiring, rides through remarkable island scenery. This island is less ideal for those seeking a more leisurely cycling experience.

The Growing Popularity of Tenerife
The tourism in Spain has increasingly gained traction as other places formerly popular with European tourists seeking sunny beaches such as Turkey, Tunisia, and Egypt have struggled with political unrest as of late, making places like the Canary Islands a safer alternative. These islands are a favorite winter destination for “sol y playa” tourists, which bring a huge boost to the economy of Tenerife. Although the residents of the island understand the importance of such visitors, it also hopes to attract more tourists interested in golfing, hiking, surfing, and cycling as time goes on.

Lucky for them, the island has already become popular with cyclists abroad. As with Mallorca, Girona, and the Costa Blanca, the amateurs followed in the footsteps of the pros, who choose Tenerife due to its arduous climbs (perfect for training) and the opportunity to stay at the comfortable, Parador del Teide, which sits at 2,200 meters above sea level.

The number of companies focused on cyclists has increased dramatically since 2014, with professional or race cyclists being the target group. 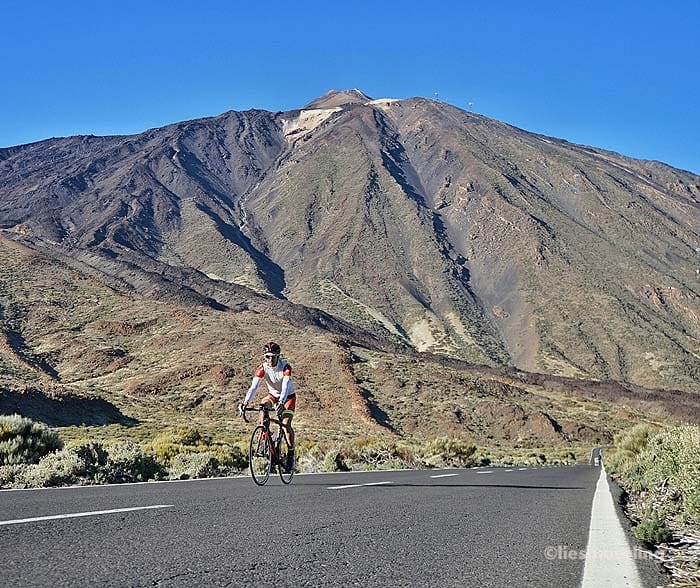 The weather, like the landscape, is also variant and unpredictable. For example, one side of the island could be 30 degrees Fahrenheit, while 20 kilometers away it could be only 15! This is due to the many microclimates that exist on the island. Despite this variation, generally speaking, the North Coast of the island is colder, wetter, and windier, while the South Coast almost always warm and dry, making the North far greener than the South. Due to these differences, the “sol y playa” tourists are concentrated in the southern side of the island in hotels and apartments, while those visitors seeking a slightly different experience are to be found in the charming towns along the northern coast.

The wind is another important factor to consider when planning a cycling trip to Tenerife to consider when planning a cycling trip. In the winter it can be quite cool in the mountains, at times even snowing above 2,000 meters in the Mt. Teide area. The sea level temperatures of the island are between 20 and 25 degrees in the winter, and 25 to 30 degrees in the summer – making cycling year-round a possibility.

Renting a Bike
According to bike rental companies, the high season for cycling on the island runs from the beginning of November until Easter. If you are looking for a racing or trekking bicycle there are plenty of choices. The majority of rental companies are to be found on the southern coast in Los Cristianos. The selections and choices available here are outstanding overall, although mountain bikes can be more difficult to find. The best part is that you can begin your trek directly from the rental company itself, where they will happily provide you various cycling routes around the island. 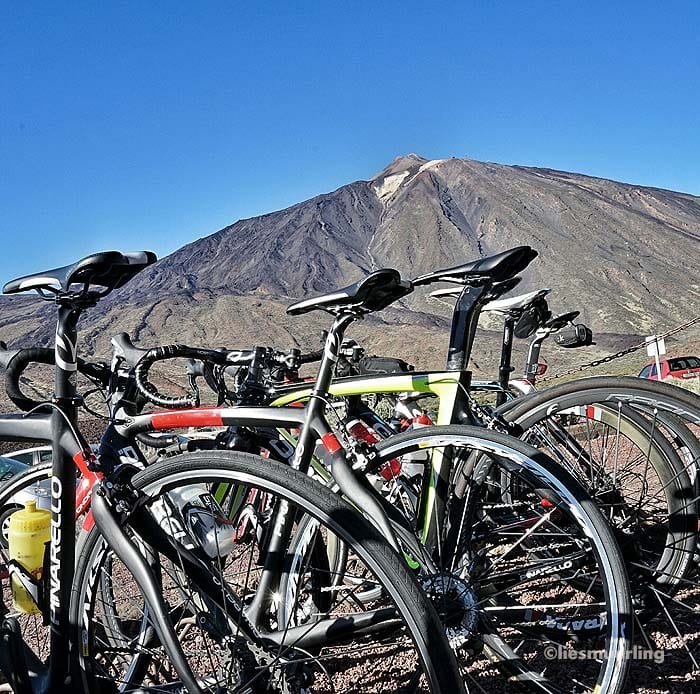 Accommodations
Hotels focused on cyclists specifically are few and far between in Tenerife. When you see the copious amount of hotels on the southern coast of the island, you would not expect that Tenerife more often than not has too few accommodations than too many. This is true, however, since many tour operators book huge blocks of rooms in advance of the high season. Therefore, it is important to book accommodations on time, especially if you plan your visit during the winter holiday season.

Routes and Roads
Although the network of roads is more limited than on Gran Canaria, it is nevertheless possible to cycle the island for two weeks and always use a different ROUTE.  Additionally, in Tenerife, you can climb longer and higher than on any of the other Canary Islands. The highest point on the island that is reachable by bike is 2,400 meters above sea level, which is the road to the volcano, Mt. Teide. You can access the volcano via three routes and no matter which you take, you will be riding through unique landscapes that you will find in few places on Earth. In some areas, it will seem as if the volcano erupted only an hour ago. The mountain is 40 kilometers away from the coast. Although some areas are up to a 10% gradient, the majority of the climb is not unbearably steep (4-7% gradient). It is possible that while climbing you may encounter a band of mist that may make it feel colder for a portion of time. A Swedish cyclist that we met on the top of the mountain gave the best advice: prepare for the climb well by not starting too fast. The climb is most notably very long and therefore wears away your energy little by little, especially with the hot sun beating mercilessly down on you. Click here for a beautiful video of the climb. 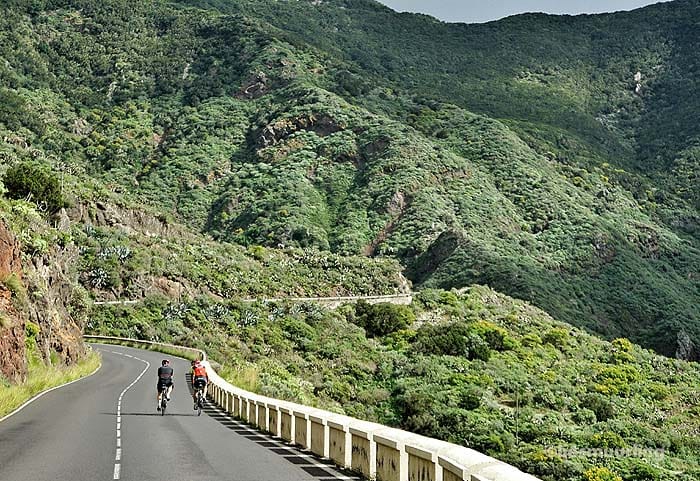 While exploring the island ourselves, we biked to the northeastern point of the island, named the Macizo de Anaga, a green, humid, mountain range that acts as a windbreaker for the rest of the island. Here we found a beautiful route that takes you from sea level up to 1,100 meters through a peaceful laurel forest full of ferns. The climb is not steep, but it is 22 kilometers long beginning at San Andres (next to Playa Las Teresitas).

Cycling Tenerife means that you must be ready to climb! Even on a short ride, you will easily make 1.000 meters elevation gain.  The pavement on the island is generally good, but unlike Mallorca, you can still encounter some rocky and less manicured areas.

Did You Know?
The sand from the snow-white beaches in the south of the island was brought to Tenerife from the Sahara Desert!

A Joke from a Tinerfeño (resident of Tenerife):
“The only reason to go to another Canary Island is for the view of Tenerife.”