INFORMATION FOR THOSE SEEKING TO CYCLE SPAIN
U bent hier:Home»Type of Cycling»Cycling Northern Spain Introduction

The cycling area Northern Spain includes the regions of Galicia, Asturias, Cantabria, Basque Country, Navarre, and La Rioja. We also include the northern part of Castile/Leon in this area because the Camino de Santiago runs through it. All in all, this is an incredibly interesting area with a variety of mountains, forests, beaches, and rugged coastlines. The abundant rain in this part of Spain provides for grassy meadows and green landscapes. The coast here is also referred to as “La Costa Verde” (the green coast).

The main route of the Camino de Santiago runs south of the coastal mountains. A less popular Santiago route follows the northern coast and is a lot heavier due to the many climbs.

The mountains of Asturias, Cantabria, and the Basque Country are an exciting destination for road cyclists. The climbs there are often crucial in the Vuelta Ciclista a Espana. Consider the Angliru and the climb to the Lagos de Covadonga. Every year, new, unknown, climbs are included in the Vuelta course, often with eye-widening gradient percentages.

The Basque Country is characterized by many hills and valleys. The climbs are short and steep. Galicia has a rugged rocky coast with fjords and a wild inland full of forests and hills.

La Rioja (including the connecting areas just over the border of Burgos and Soria), is an extraordinary cycling region because of the combination of rugged landscapes, incredible nature, beautiful vineyards and vegetable gardens in the valleys, historic places, and many quiet roads.

Relief
All in all, the northern Spanish coastal provinces are very mountainous. From sea level, the elevation climbs immediately. The mountains of this so-called “Cordillera Cantabrica” form an extended relief from east to west and are a continuation of the Pyrenees. The rugged Picos de Europa are part of it. South of it begins the Meseta, the Spanish plateau.

Routes and Roads
Pilgrims have been traveling the Camino de Santiago for many centuries on their to the tomb of the apostle James. The route has also been discovered by cyclists in the last decades. There are several routes, but the most common is the southern Camino Francés. On this route, you cross the Pyrenees at the Col du Somport or at Saint-Jean-Ped-de-Port. Then it goes through Logroño (Rioja), Burgos, Leon and Ponferrada (Castile) to Santiago de Compostela. Some cyclists find the Camino Francés too busy and prefer a more northerly route. In this case, you encounter more mountains. 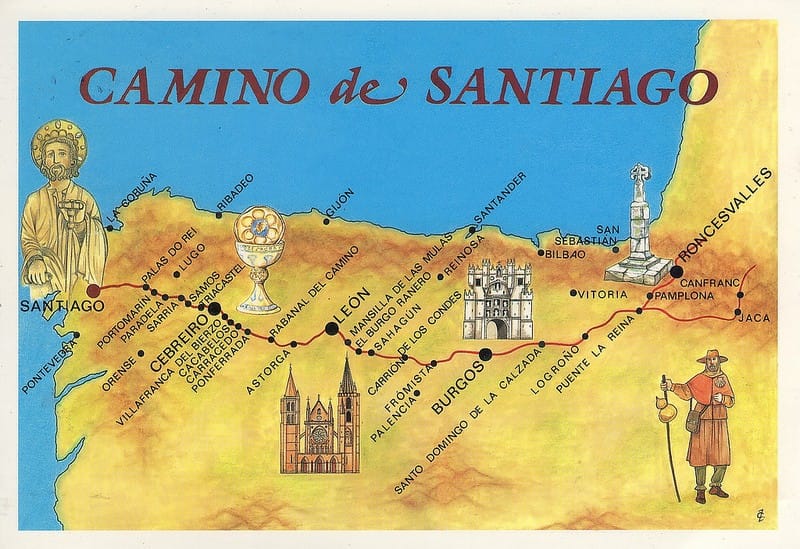