INFORMATION FOR THOSE SEEKING TO CYCLE SPAIN
U bent hier:Home»Background Info on the Regions»Andalusia»Cycling Mojacar (Andalusia)

Cycling through the driest region in Spain
There are a few places in Spain where cyclists are at the center street scene – where bike shops, rental companies, cycling hotels, and cycling routes are located all contributing to a true, cycling, culture and atmosphere. Mojacar in the north of Andalusia is one of these places. When compared to other cycling destinations in Spain such as the Costa Blanca, Mallorca, or Girona, Mojacar has a few specific benefits and advantages, the only disadvantage being its distance from the airport. 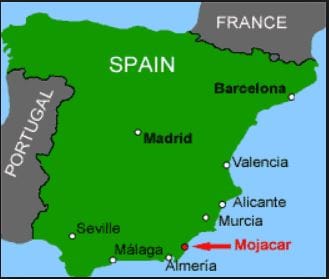 Mojacar is a coastal town about a one hour drive north from Almeria (Andalusia). The beaches here are not as touristy as the Costa Blanca to the north and the Costa del Sur to the south. As you make your way inland from the coast, the terrain quickly becomes hilly, which makes for excellent cycling. If you are looking for a longer ride, you can make your way high into the mountains to elevations of nearly 2000 meters. The dry, arid, landscapes you will notice as you cycle are characteristic of this area in Spain as only a few hundred millimeters of rain falls yearly, and the sun shines an average of 320 days per year. In the afternoon there is usually a nice breeze from the ocean.

Here you can also go mountain biking in the Sierra Cabrera, directly next to Mojacar.

The Town of Mojacar

Mojacar consists of two parts. The old (white) town lies one kilometer inland on top of a hill. It is a gem of a village and mostly unspoiled by tourism. When there, it is not surprising to find out that Mojacar is believed to be one of the most beautiful villages in Spain.

Along the coast is the touristy Mojacar – a kilometer of restaurants, shops, and hotels. Although less charming than the old village, this part of Mojacar is still a nice place to visit as it is not filled with untasteful high rises, but rather with buildings that fit attractively into the landscape. This area is very quiet during the winter and early spring; most of the tourists to be found during these periods have gray hair and have driven there in campers to escape the colder northern European weather. The airport in Almeria ensures there is a consistent stream of English sun tourists in the region. Although some businesses and restaurants close their doors for the winter season, the summer is a different story – during this time of the year Mojacar is bursting at the seams with life.

One of the greatest advantages of Mojacar is the quiet roads during the majority of the year, which means you do not have to fight traffic as a cyclist. Within a few minutes, you are out of town and can either ride north or south along the coast, which are slightly busier, as with many coastal roads in Spain. If you make your way inland, however, the terrain quickly becomes hilly and mountainous, with small villages scattered throughout that always have a bar with a terrace, offering a lovely rest stop.

Belgians are the Majority

Something that struck us when we were visiting of Mojacar was how many Belgians were drawn to the area. Many of these visitors had booked cycling vacations through the cycling company Kortweg, which is prominent in Mojacar. There is even a Belgian cycling café (San Pedro) with delicious Belgian-style fries!

The only major drawback of Mojacar is the distance from international airports. If you are not lucky enough to have a direct connection to Almeria from your country, you will have to rely on flying Alicante or Malaga. If you rent a car in Alicante, you can drive to Mojacar in 2 hours and 45 minutes, from Malaga the journey takes up to an hour longer.

Pros and Cons of Cycling Mojacar

– Distance from the airport

View from the village