INFORMATION FOR THOSE SEEKING TO CYCLE SPAIN
U bent hier:Home»Type of Cycling»Cycling Mallorca

Carefree Cycling in Mallorca
Imagine someone approached you, handed you a blank piece of paper, and asked you to draw an ideal island for cyclists – what would you include?

A perfect cycling island would likely include challenging mountain ranges, but also flat areas and rolling hills. There would also be accessible and well-paved roads connecting picturesque villages including charming squares to rest your legs while enjoying a nice cup of coffee or tea. Of course, you would not forget to include an extensive network of cycling routes and lots of shops specializing in biking and cycling that could aid in renting bicycles, arranging transportation, and organizing all-inclusive cycling trips. When considering the weather, this ideal island would, of course, have ample sunshine providing pleasant cycling weather almost all year round.

Mallorca, The (Nearly) Ideal Cycling Island
Trying to create a perfect cycling an island from scratch is a waste of time considering that it already exists off the coast of Spain –Mallorca! The island was first discovered as a cycling destination in the 1990s and has since developed into one of the most popular cycling destinations in Europe. The island’s popularity grew so exponentially due to the fact that it was advantageous for everyone involved; hotel owners wanted to fill their rooms during low season (winter and spring), cycling travel companies booked hotel rooms for reasonable rates and set up bicycle storage and workshops in the basements of the hotels, and the cyclists adored all the island had to offer – beautiful accommodations, good rental bikes, and awe-inspiring routes. What more could one want?

Due to the increasing popularity of the island as a prime cycling destination, from February to June the island is crowded by cyclists, especially large groups of road cyclists.  There are therefore some, unfortunately, who believe Mallorca has become overcrowded with bicycles.

The Island from North to South
At the northern point of the island stretch two bays that lie side by side, the Bay of Pollenca and Alcudia Bay. The northernmost tip of the island is called The Formentor Peninsula or the Cap de Formentor, which protrudes into the Balearic Sea. The town of Pollenca remains authentic as the coastal development here is smaller in scale while Alcudia, on the other hand, is much more developed with extensive seaside resorts, hotels, shopping malls, cafes, and restaurants.

The east of Mallorca is one of the more popular tourist destinations with ample seaside resorts that attract families seeking holiday sun. The East is also where you will also find the rolling hills of the Sierra de Llevant, which do not reach above 400 meters.

The middle of the island, referred to as the Pla, is a fairly flat agricultural area crisscrossed with numerous small roads.

In the rugged west of Mallorca lie the beautiful Tramuntana Mountains with more than 40 peaks breaking an elevation of 1,000 meters. Here you will find deep gorges, steep walls, and roads which will leave your mouth gaping in wonder.

The south of the island includes the beautiful capital Palma de Mallorca and the crowded Bay of Palma. The beaches and cafes of the bay attract throngs of tourists from all over Europe seeking summer sun, sand, and sea. Compared to the tourist hub to the north, Alcudia, however, the Bay of Palma has just a touch more style.

MALLORCA BY ROAD BIKE
During the spring, it feels as if Mallorca organizes a Gran Fondo every day of the week on all roads simultaneously. The season begins in the middle of February, and peaks in the month of April. Everywhere you look during this time period you see groups of cyclists from all over the world, especially Germany. While cycling the island, we noticed that in many places the roads are quite narrow and that widening these roads will not likely happen, as the roads are all lined with thick walls of stone. Although it took the locals some time to become used to the high volume of cyclists on the roads, they have accepted them and learned to maneuver around them knowing that much of the island’s prosperity can be attributed to these visitors.  Tourists in rental cars, however, are much less accustomed to this high volume of bike traffic, and therefore have more trouble avoiding cyclists. Luckily, however, by the time the island becomes overrun with tourists in rental cars, the cycling season has already passed.

It’s All There, The Choice is Yours.
The options for cyclists in Mallorca are endless. The hundreds of bike rental companies to choose from, with tens of thousands of bikes between them, render bringing your own bike unnecessary when visiting Mallorca. Once your bike is settled, you can then choose from the various cycling routes available; some possibilities include purchasing one of the beautiful road maps available on the island or renting a GPS device with pre-programmed routes along with your bicycle. Finally, you can choose a route with high or low elevations.

As mentioned previously, there are so many cycling facilities on Mallorca, you can easily organize your own cycling trip. If you would rather not think about it, however, there are also plenty of cycling companies around the island that often include both hotel rooms in the north (Alcudia) and in the south (Playa de Palma). If you are looking to avoid these larger tourist hubs, then there are also plenty of alternatives available on the island that rent houses or villas around Mallorca, rather than in these more crowded destinations.

Climbing
The climbs on Mallorca are rarely very steep. In the Tratamundo Mountains, however,  it is easy to gain lots of elevation in one day. The roads there are beautiful, with good asphalt and good curves.

Our Favorite Climbs in Mallorca:

Sa Calobra:
A special experience, no matter how many mountains you have cycled in your life. The road winds like spaghetti through a beautiful mountain landscape. 13 kilometers at an average gradient of 7%.

Puig Major:
Nearly 15 kilometers, at an average gradient of 6%. The longest climb on the island.

Col de Sóller:
An average gradient of 6% over 7.5 kilometers. A nice, quiet, road as much of the car traffic to and from Sóller takes the tunnel.

MALLORCA FOR MOUNTAIN BIKERS
The Llevant Mountains on the east coast of Mallorca provide an excellent spot for mountain bikers of all levels. Although the mountains do not reach higher than 400 meters, this does not mean that there are not beautiful and challenging routes to be found and explored. Cala Bona and Cala Millor are good starting points.

Although Mallorca is filled with paths and unpaved agricultural roads, most of these run across privately-owned farmland where you need permission to ride. Even when permission is granted, you are likely to run into many fences and impassable obstacles while on them.

These types of obstacles make mountain biking on Mallorca difficult without good preparation, which means that opting for a guided tour is recommended. In this realm, there are plenty of businesses throughout the island that are happy to help you.

MALLORCA FOR RECREATIONAL CYCLISTS
Mallorca also offers plenty of opportunities for recreational cyclists. There are many places where you can rent touring or trekking bikes, especially in the capital Palma and along the boulevard of the Bay of Palma, which offers a picturesque and ideal setting for biking along the water. Due to the fact that much of the island is flat or only slightly hilly, riding a bike as your primary transportation is completely possible.

Mallorca also offers a Via Verde (bicycle path built on an old railway track), but this was severely damaged by heavy flooding (2019) and therefore, unfortunately, cannot be accessed for the time being. 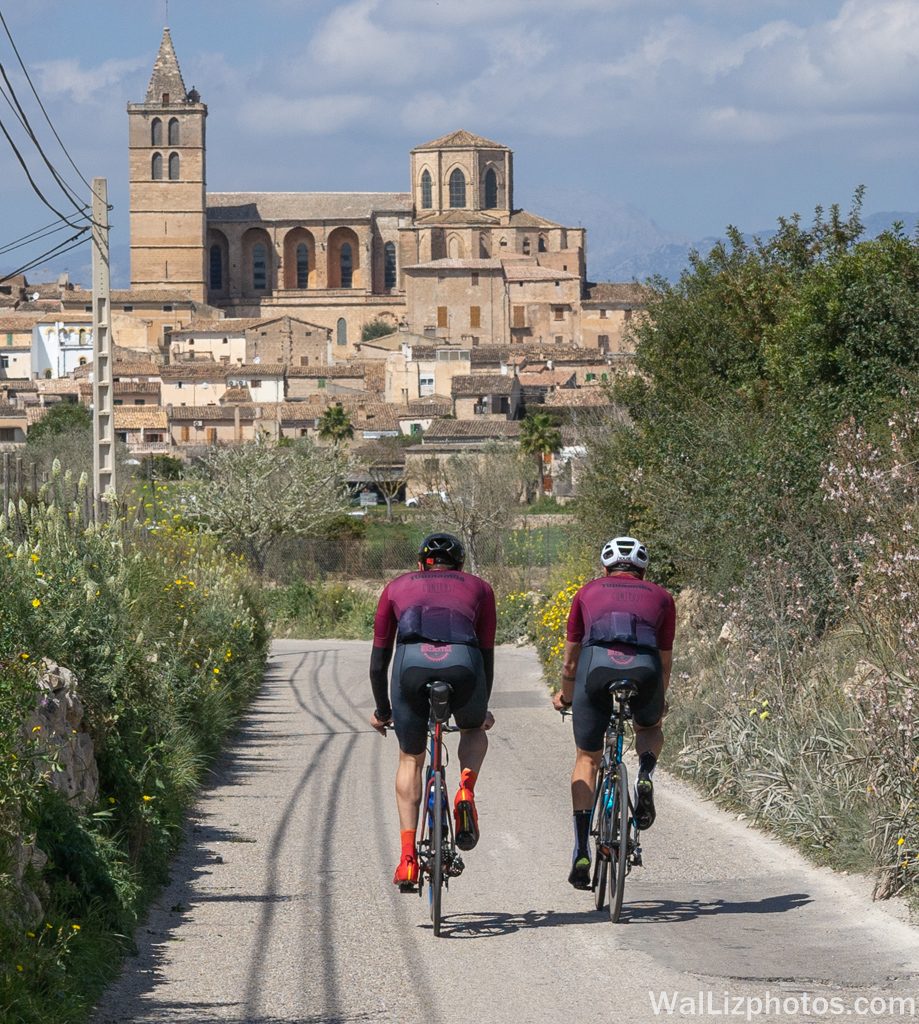 A town square in spring

In the et Tramuntana Mountiains