INFORMATION FOR THOSE SEEKING TO CYCLE SPAIN
U bent hier:Home»Background Info on the Regions»Canary Islands»Cycling Lanzarote

Cycling Lanzarote is a Party of Everyone (but beware of the wind!)
Lanzarote is a wonderful destination for cyclists of all levels because unlike Tenerife and Gran Canaria, you do not need much climbing experience. The roads on the island are well-maintained and there are many cycling companies that offer both rental bikes and excursions. The island has a very athletic atmosphere and there are cyclists everywhere you look. If we were to mention anything negative, it is that Lanzarote can be very windy at times, the upside of that is that it is a warm wind!

Lanzarote is the northernmost of the Canary Islands. The island is covered with a large amount of mostly dormant volcanoes. However, in the Timanfayo National Park where most of the volcanoes on the island are found, there is still volcanic activity under the surface. Just like on the other Canary Islands, the North of the island is cooler and experiences much more rainfall than the South. The North is also much greener and has more hills than the South. Lanzarote is 62 km long and 21 km wide. The highest peak is 671 meters.

Weather and Climate
The weather in Lanzarote is pleasant throughout the year, offering day temperatures between 18 to 22 degrees during the winter, and 26 and 32 degrees in the summer. Even on cloudy days here, the sun finds its way to peek through and shine upon the island. Rain is very rare, but of course, there is always the risk of being some of the unlucky few that experience rainy days while on vacation. 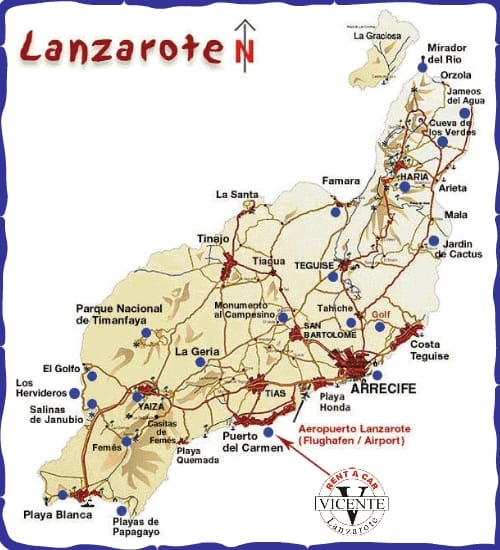 Roads and Cycling Routes of Lanzarote
When you look at the map of Lanzarote, there is a clear network of connected roads. Although most of them are in great condition, they are not all equally wide. This can be difficult to navigate at times as there is a consistent amount of car traffic on the island between locals and tourists. Unlike other parts of Spain, the island has less secondary roads that allow one to avoid heavier trafficked areas, but the plus side is that motorists on the island have a lot of respect for cyclists. They will rarely try to take you from behind, without giving you a large space buffer. Additionally, drivers that do not give you a minimum of 1.5 meters of space risk receiving a hefty fine.

An Unspoiled Island
We think that Lanzarote is stunning. With its lava fields, white sand beaches, and green valleys, this small island leaves a large impression on anyone who visits. There is also another reason Lanzarote remains such a beautiful destination; everything that taints or spoils the natural beauty of a place (i.e. high-rise buildings, billboards, electrical towers, etc.) has been intentionally excluded from the island. Instead, Lanzarote is smattered with small towns filled with cracking whitewashed buildings with green doors, shutters, and windows. To gain insight into the natural beauty of Lanzarote, you can watch this short video here.

Tourist Centers
The main tourist centers of Lanzarote are to be found in the beach towns of Puerto del Carmen, Costa Teguise (both found of either side of the capital, Arrecife), and Playa Blanca (the southernmost point of the island). In these three places, everything revolves around tourism, which means that there are many restaurants, hotels, apartments, and tourist attractions. Although you may still come across typical beach tourists drinking beer at 10 A.M., compared to the other Canary Islands and mainland Spain, the atmosphere of Lanzarote is much more relaxed, small-scale, and friendly, which probably has to do with the lack of high rises.

Bicycle Rental Lanzarote
Many people visit Lanzarote for a sports vacation as the island is a favorite destination for surfers, triathletes, and cyclists alike. For example, Sport Hotel La Santa is popular with many top athletes. As the island grows more popular with athletes, the companies geared toward sport (including cyclists) are growing exponentially year to year. A few companies rent bicycles of poor quality for as little as 5 euros a day (stay away from these) and there are also some untrustworthy owners that should be avoided. On our site, you will find only companies that we have personally worked with and vetted as reliable, fair, and trustworthy that are located in Puerto del Carmen and Costa Teguise. All types of bikes are available, including triathlon bikes, city bikes, mountain bikes, trekking bikes, electric bikes, and racing bikes. 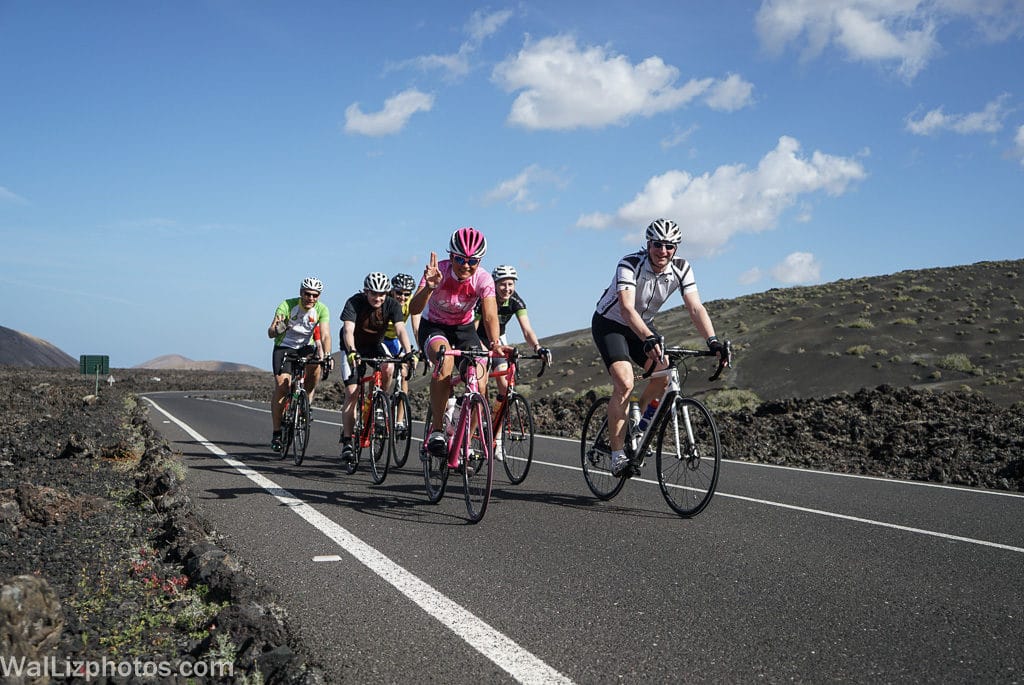 There are plenty of cycling routes for a week-long cycling vacation in Lanzarote. You can either do this alone, or you can sign up for one of the organized tours offered at many rental companies in which you tour the island together with other cyclists and a guide. If you visit the island intending to climb, your options are somewhat limited. There is a nice climb (Tabayesco) in the north of the island (10 kilometers with 5% average gradient), and another, short, brutal, climb to Femes in the south reminiscent of La Redoute that has a 21% gradient at the end of the ride. Besides these two climbs, there are shorter and more gradual climbs scattered throughout the island and regardless of whether you are climbing or not, the wind of the island always makes the rides a bit more challenging.

Lanzarote for Leisure Cyclists
If you are seeking leisurely flat biking routes, your options in Lanzarote are limited, but it is not impossible. Rent a bike in Puerto del Carmen and bike along the boulevard toward Arrecife. At a certain point along the route, you will bike with the ocean on one side, and the runway of the airport on the other. If biking by at the right moment, you can witness a plane taking off or landing directly next to you, while simultaneously experiencing ocean views – quite a unique experience!

If you want to go inland, you will have to climb, which can feel more difficult than it is, due to the large amounts of wind. This means you either need to be in decent physical shape, or you can take a shortcut by renting one of the electric bikes available at many companies around the island.

There are several companies that offer tours for recreational cyclists around the island. You can decide between a half or a whole day group tour led by a guide, which includes many sights and a stop for lunch. In some cases, these tours also offer electric bikes as an option. 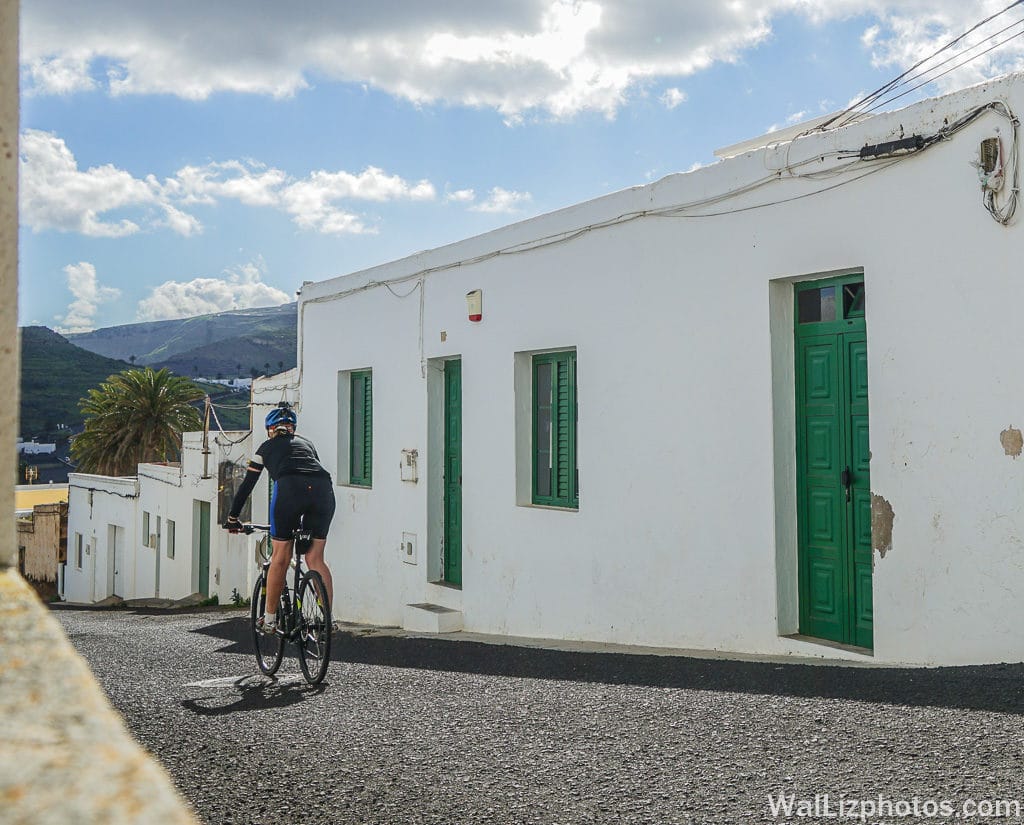