INFORMATION FOR THOSE SEEKING TO CYCLE SPAIN
U bent hier:Home»Type of Cycling»Cycling in Madrid

On this page, you can read about cycling in the city and the surrounding area of Madrid, including:

Cycling in the center of Madrid
Spain’s cities are becoming increasingly bike-friendly, but the capital of Madrid is still lagging behind. There is a lot of talk about expanding bike infrastructure, but developments are slow. Biking in Madrid is possible, but you have to be a seasoned cyclist.

Madrid is a city made for cars with wide avenidas with four to six lanes. Bikes are formally considered vehicles and therefore can ride anywhere, to the dismay of many taxi and bus drivers who find cyclists particularly annoying. The main roads are busy and as a cyclist, you feel quite exposed to the traffic around you; nevertheless, only a small number of serious bike accidents actually occur.

Cyclists are not often seen on the road, but the development of bike infrastructure is noticeably underway. The arrival of a system of electric loan bikes has done a lot of good. Madrilenians are now coming around to the idea of cycling as a way to get around the city. The bikes are available to everyone, including visitors, but we didn’t think they looked that great. Renting a bike is safer, more convenient, and inexpensive. You also see cycling meal deliverers with large boxes on their backs making their way through traffic.

Where to bike?
The large avenidas often have a lane where cars cannot go more than 30 km per hour, making it a safer choice for cyclists. On weekdays it may be better to seek out the quiet streets in the center. The avenidas are considerably quieter during the weekend, making them more accessible for cyclists. The large Paseo del Prado is even closed off to car traffic on Sundays. There are also several bike lanes in the city, although sometimes these suddenly end or do not connect.

Why cycling in Madrid is still worthwhile
Okay, so you may have to be quite an experienced biker and stay alert at all times, but it is still nice to ride your bike through Madrid. There are a few companies that offer organized tours and know the most beautiful places and quieter streets. They will, of course, take you to the beautiful Retiro Park (you can cycle on the paved paths) and to the new bike path along the Manzanares River. Bear in mind that it is a climb back to the city from the river. A longer route also includes the Caza de Campo park where you as a cyclist have a lot of space. A bike tour gives you a good idea of the center of Madrid, which is actually quite compact and therefore highly accessible by bike. 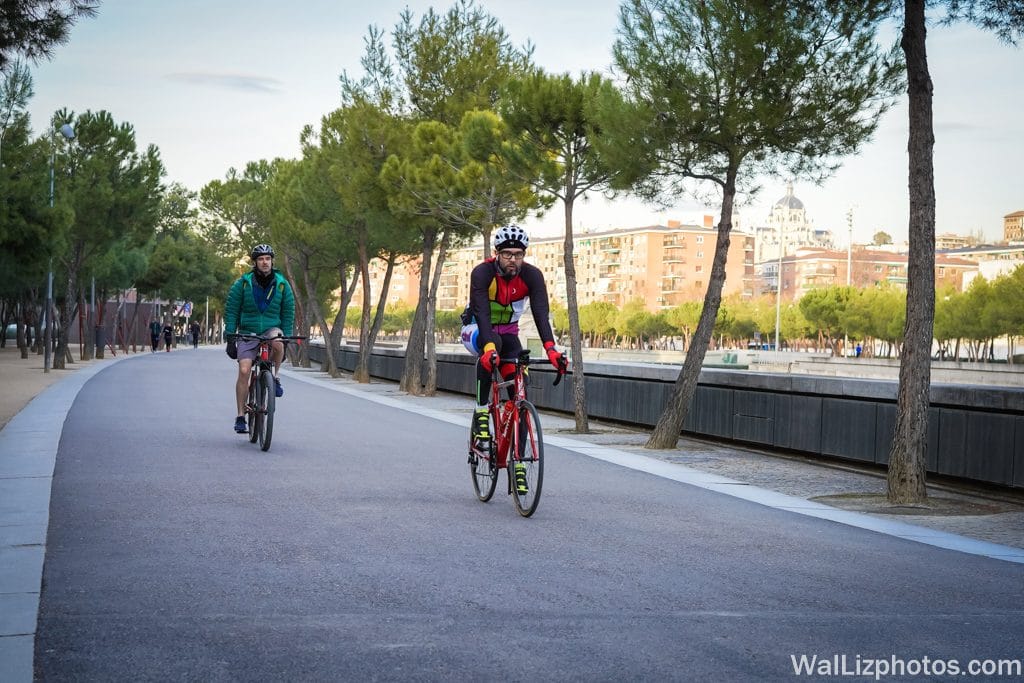 Longer rides in the city
If you want to take a longer ride then you can ride from the river to Casa de Campo on the west side of the city. There is a lot of cycling done there, also by more competitive cyclists.

You can also ride from the river to the “Anillo Verde,” the green ring around Madrid. This is 65 km in length and signposted. Not all of the parts are equally interesting; we would recommend those on the southwestern side of the city, which families use for recreation during the weekend. Despite the attractive name, the whole Anillo Verde is not recommended.

Cycling outside of the city
If you are interested in cycling longer distances with a road, trekking, or mountain bike, then the area around Madrid is quite a good option. To find your way out of the city you can follow the bike path from the Anillo Verde in the north along the highway. This bike path ends in the village of Soto del Real, a famous base camp for cyclists. From there you can cycle various beautiful routes through the challenging Sierra of Madrid. 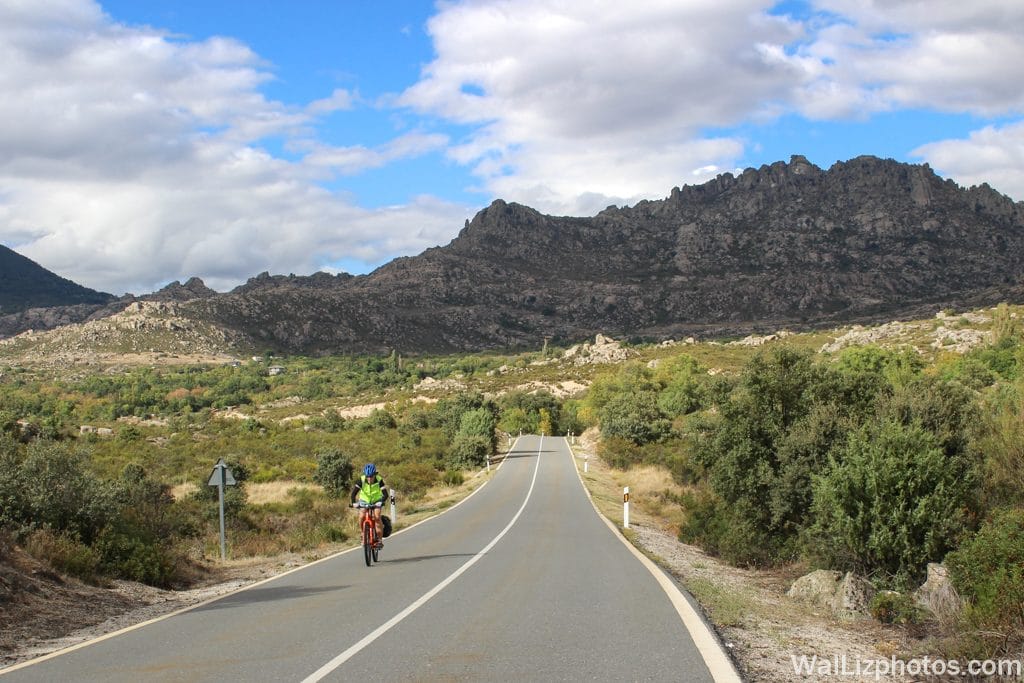 If you do not want to cycle out of town yourself, you can use a Cercania. These are trains for short distances where you can bring your bike for free. Madrid has ten. One of the lines goes to the Escorial, the immense palace of Philips II. From here you can easily cycle.  Another good starting point is the equally famous Aranjuez, south of Madrid, from which you can choose out of a variety of routes, including the via verde Tajuna (49 km).

Bikes in the metro or train
Madrid has the third largest metro system in Europe. All lines are clearly indicated by color and you can go anywhere. Line 8 (pink line) goes to the airport (with a surcharge). Bikes are allowed on the metro during the weekend and outside rush hour (the hours between 7:30-9:30 AM, 14:00-16:00 PM, and 18:00-20:00 PM). Some platforms are very deep underground and only accessible by long stairs and/or escalators. There are elevators, but whether or not it is handy with a bike…?

CiclaMadrid, the major route around Madrid
A 420-kilometer cycling route along the highlights of the Madrid province – a new ambitious project called the CiclaMadrid. You can easily access the route from the city of Madrid by using one of the Cercania trains. The route is a ring around the city, so you will eventually return. The project is still relatively new and has a lot of room for improvement; the route generally follows unpaved paths, which can vary drastically in quality. 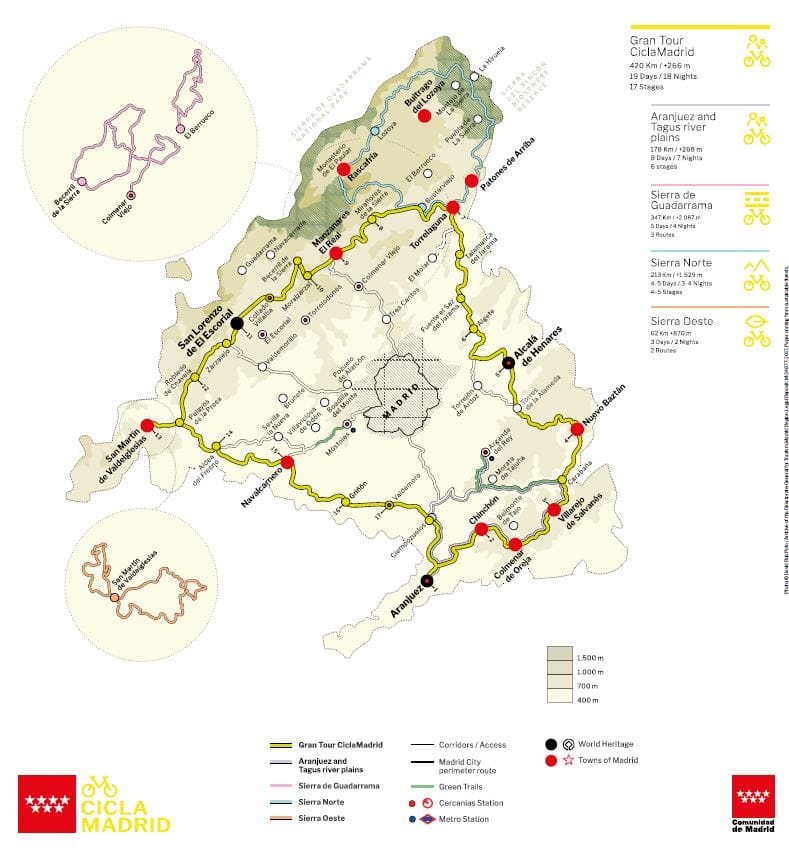 Museums
Madrid has beautiful museums with rich collections. The most well-known museums are the Prado, the Thyssen Bornemisza, and the Reina Sofia. The nice thing is that you can visit those museums for free at the end of the day. The Prado is free every evening between 6 and 8 PM.

The Climate
It is boiling hot in Madrid during the summer months, it is therefore recommended to visit the city during the early and late seasons. Even in winter, it can be quite pleasant with chilly winter days and clear blue skies. We were there for a few days in early February and had 17-degree weather with clear blue skies.