INFORMATION FOR THOSE SEEKING TO CYCLE SPAIN
U bent hier:Home»Background Info on the Regions»Andalusia»Cycling the Costa de la Luz (Andalusia)

The Costa de la Luz
In the southernmost point of Spain, between Gibraltar and the Portuguese Algarve, you will find the Costa de la Luz. It is one of the longest coastlines in the country with more than 200 kilometers of fine, gold-colored, sandy beaches along the Atlantic Ocean. The coast gets 300 days of sun per year but is quite susceptible to wind. It is therefore very popular with windsurfers. 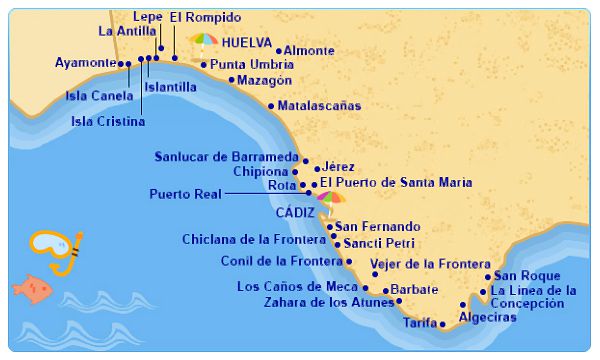 The Costa de la Luz is overall quite unspoiled. It lacks the ugly high-rise buildings common in other Spanish coastal towns and is mostly frequented by Spanish, rather than international, tourists. The coastal areas are generally flat, while the inland is hilly and not too steep. This is quite a difference from other coastal regions of Spain where the inland quickly becomes precipitous shortly after leaving the seaside. In these inland areas, there are many interesting places to discover such as Medina Sidonia and Arcos de la Frontera.

Overall, the Costa de la Luz is a lovely cycling destination that has yet to be discovered by cyclists. The two largest cities are Cadiz and Jerez; out of the two, Cadiz is quite a gem of a city. The smaller and more charming villages include Conil de la Frontera, Sanlucar, and Vejer de la Frontera. To get to the Costa de la Luz you can fly into Sevilla, or sometimes into Jerez.