INFORMATION FOR THOSE SEEKING TO CYCLE SPAIN
U bent hier:Home»Background Info on the Regions»Central Spain»Cycling central Spain – Introduction

Central Spain is made up of the regions of Castile Leon (except the north), Castile La Mancha, Extremadura, Aragon (except the north), and Madrid. This vast area is dominated by the Meseta, a vast plateau that is interrupted in various places by hills and mountains. Here you will find something that is becoming increasingly scarce in other parts of the world: peace, emptiness, space…

The countryside in the interior of Spain is becoming increasingly depopulated as younger people are moving to the cities, leaving most of the older population behind. Therefore, as you cycle through central Spain it is not always certain you will find a shop or bar in every village as it was in the past.

Yet, central Spain is the place to be for true Spain enthusiasts. The vast landscapes, the lovely people you meet along the way, the charming old villages, and the historic and beautiful cities of Toledo, Caceres, Salamanca, Avila, Merida, Teruel, Cuenca, make central Spain an area not to be missed. The capital Madrid ensures that you will never be longer than a half-day (by train or bus) from a large airport.

Relief
The Meseta plateau is at an average height of 800 meters. The word plateau is actually incorrect, as almost no part of the area is flat. Instead, the elevation changes all the time and the routes are often interrupted by mountain ranges cropping up, including, the Gredos, Guadarrama, Montes de Toledo, and Sierra de la Demanda. 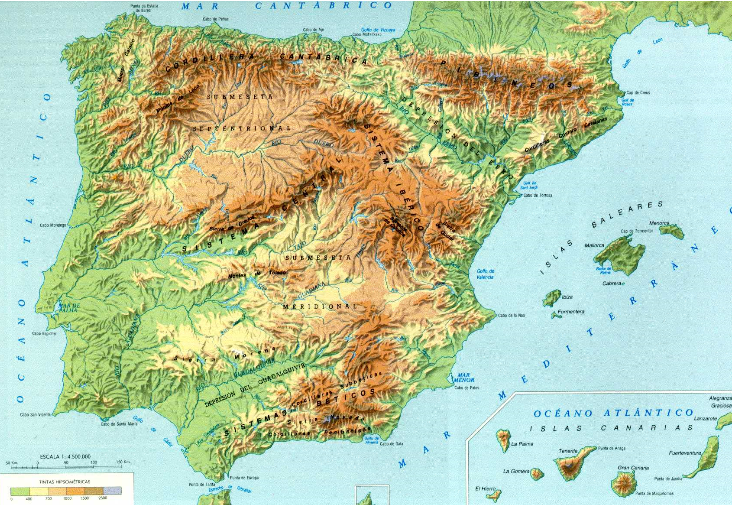